March 16, 2020Battle of the Decade, Uncategorized

You can vote on which decade had the most impactful movie as a child in the top right corner of this video!

Subscribe for more and our latest episodes here: http://bit.ly/2TGNmJu

Round 1
0:20 – Scott gives his honorable mentions and his final pick for his most impactful
movie as a child from the 1980’s.

Round 4
8:16 – Scott and Adam give their final reasons on their choices for their most impactful
movies as a child..

12:01 – YOU CAN VOTE IN TOP RIGHT CORNER on what you thought was the most
impactful movie.

See the full episode this clip is from here: https://youtu.be/wwbhR0HIW24

Links to some of the art used in these videos – http://bit.ly/2Q6UYmb

Watch next – More Battle of the Decade Clips – https://www.youtube.com/playlist?list=PL-mEgGvN0a2by66MWaYVzso4AjIP4dX7v

Once again, please leave us your comments on anything regarding the 1980’s or 1990’s and if you enjoyed this video, please remember to hit that like button and share! Sharing really helps us out!

Please keep in mind, the content of these videos is for entertainment purposes only. Nothing is to be taken as facts and we do of course make mistakes. Some of the content contains video clips, images, and definitions from sites like Wikipedia to strike up memories and conversation on past decades and years. Again, these videos are for entertainment purposes only, not fact, and mistakes may be made. It is one of the reasons we decided on animation for the videos, to help with the entertainment value and the fun of the videos. Enjoy.

Happy holidays to everyone and have a great retro

Happy Halloween from @10yearsapartpod  Have a saf

In this episode we will be discussing which decade

#automan was a #80s #favoritetvshow that aired fo

Do you know the Canadian 'Mr. Rogers'? Canadians w

Would the #bmxbike fly today? Find out in Episode

What was the best #saturdaymorningcartoon ? #80s v

Some #classic #fisherpricetoys popular in the #80s

Wet Banana and Slip and Slide... What was the diff

Anyone remember these from back in the day? (might

84 vs 94 movies! There are many movies not in this

Anyone else have these from #tinkertoys instead of

Getting warmer! Reminds me of eating Sno-Cones #ba

Working on a new episode of #10yearsapartpodcast a

Anyone else first music experience come from one o

Adventure People from Fisher Price. Did you have a 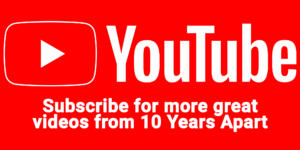 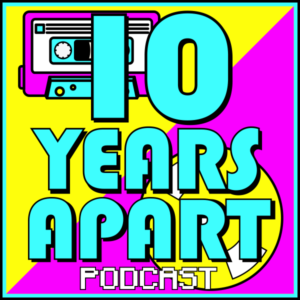 On this day in 1983, Billy Idol released the single Rebel Yell from the album of the same name.